I have just returned from the South East Asian games in Langkawi, Malaysia, where I was working as Technical Director for the host Malaysian Sailing who were delighted to come away as top sailing country with medals in every event with a total of 6 Gold, 4 Silver and 4 Bronze.

The event kicked off with an amazing opening display and I was very thankful to be seated with the VIPs rather than being part of the parade itself and avoiding a lengthy stand. Malaysia certainly pulled out all the stops to make all the countries feel welcome and the Philippians certainly have a hard act to follow.

It was certainly a different regatta. For doping, Team Leaders were required to draw cards to select which of their Athletes would be tested. I also saw the goal posts moved a couple of times. For example, the Malaysian Team Laser sailors at measurement were told that their 6-digit sail numbers had to match their hull numbers, even though they were borrowing the hulls from the National Sailing Centre. Yet later several teams were allowed to pass measurement with just a single sail number!

The Championships kicked off with Team racing and probably the most enjoyable event for me of the whole regattas was the Optimist team racing, not purely because Malaysia won but with 4 boats in a team there were some close calls, and it certainly improved my maths, trying constantly to calculate who was winning.

Fleet sizes were small, with some classes having as few as 4 entries. So, it looked very different from a normal championship. Often with quite a lot of pin end start line bias the match racing started early and until the medal races started I spent pretty much every evening in the protest room as an observer. The best was a run of 3 protests 18,19,20. I ended up joking to the Team Leader if he could make me a packed dinner to have then I would be very grateful, although I am not sure if my English sense of humour always translated.

Some of the racing was extremely close and although the 470 Men after a nervous first day went on to take a relatively easy victory, the 470 Women ended up losing the race and the Gold medal by a matter of feet on the finish line. Indeed there were lots of close racing with the 3 way tacking duel in the Laser men’s medal race being just another example.

The SEA games came to a close and with more photos taken than I have ever seen and the flag was handed to the Philippines. Indeed there were so many photos taken I struggled to find time to do my final debrief with the sailors who raced on the last day. Our next goal is the Asian games in Jakarta, Indonesia next year, time for Sailors, Coaches and Leaders to review what well went and what went wrong. Retirement for some, a change of class for others and new challenges for all. 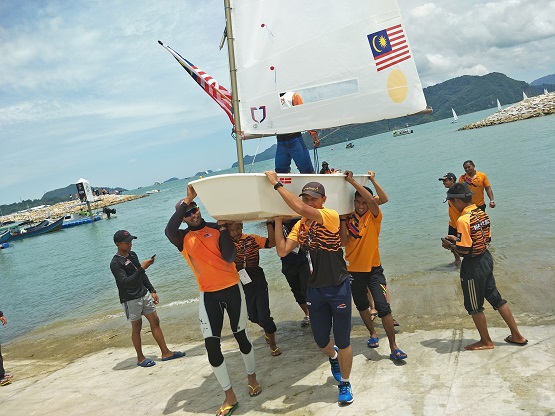 Jon Emmett has over 20 years of coaching experience from grass roots to Olympic Gold.