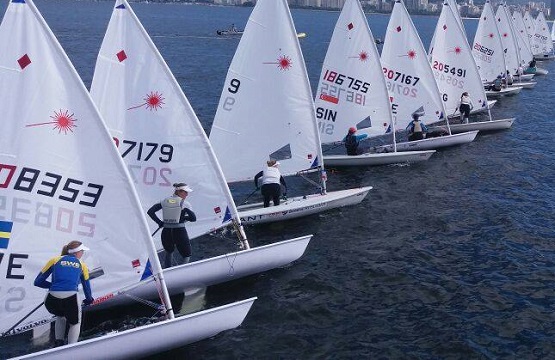 (If you want to do international events or just bring your sailing to the next level then you have to do the Qualifiers!!!)

The UKLA use the Qualifiers as a means of qualification for international events as it is the fairest and therefore best means of deciding the team. There is no selection process and therefore, absolutely no chance of any favouritism. Being part of an RYA squad or on RYA funding does not mean you get an automatic place. Just like at international regattas, you have to prove yourself on the race course and, with the number of races at the Qualifiers (6 scheduled races for Standard and Radials) and the number of Qualifiers each year, (6, with the best 4 to count for Standard and Radials) it works out well. Everybody has to do the events and there are no exceptions (there is no provision for average points and no intention to add this in the future). It is therefore strongly recommend that you attend all events, in case later you have a bad event or are later forced to miss one due to illness or injury. The cream always rises to the top and there are no excuses.

In the UK, we are incredibly lucky to have such a depth of talent as we do. Few, if any, other countries, are able to have such competitive races and it is this which makes the sailors who do come out on top, truly world class. If you want to improve, then you have to race against the best possible competition and that is why everyone has to do the Qualifiers. Remember, people spend a lot of money travelling around the World to train and race against the top sailors, such as Nick Thompson and Alison Young, both Olympic medal contenders for the  Olympic Games. We are lucky enough to have a great fleet on our doorstep and it is a system that such legendary sailors as Ben Ainslie, Iain Percy and Paul Goodison came through, so it is very hard to argue with that.

We are so fortunate in Sailing that we have the opportunity to line up against Olympic sailors. In what other sport can you do this? Certainly, you cannot just enter on line to play at Wimbledon. In Sailing you now have to qualify to race at the majority of high level international regattas (which is why we have the Qualifiers) but anyone can compete in the Qualifiers themselves and have the opportunity to line up against Olympians, how great is that?

The dates of the Qualifiers are of course influenced by the timing of the international events for which you would like to qualify, exactly when varies from year to year. Therefore, our calendar reflects this. It is a hard job to get the events close enough together that the qualifying sailors do not need to fly to and fro all the time whilst at the same time not having the events every weekend putting pressure on family time and school work for our younger sailors. Likewise, we try and put them later on in the year, when it is warmer, but we have to get them completed prior to the European international season starting... in short it is an extremely difficult job!

Whilst the dates are set around those sailors trying to get to the Olympics (and remember we also need to take into consideration the Youth Nationals, the Dinghy Show and lots of international events), it really is open to those sailors who simply want to come and experience great racing. The choice of venues is dictated by our past experience. We need venues that offer great racing as well as good facilities onshore at a reasonable cost to the association (and therefore the sailors racing at the event). Likewise the spread of venues represents the number of participants (for example Stokes Bay usually has a great turn out) and although we do try and go north we usually lose numbers, so the number of events represents this fairly and of course we are always looking out for new good venues which are keen to take us.

Whilst, as a club sailor, you may find it slightly daunting to go to your first Qualifier, you need to remember the benefits are huge. You will be amazed at the increase of performance you will get from your first season of Qualifiers, which will surely translate into far better results at your club. As long as you are capable of racing in strong winds, then every UKLA member is welcome and everyone has someone to race against. For Radial sailors, it is a great way to get to sail in a much bigger fleet. Indeed, the Radial fleet has often been so big at Qualifiers, that it has not been practicable to race them all as one fleet.

Therefore sometimes we need to split the Radials into two fleets and we have one day of "round robins" where the sailors are split as equally as possible (in terms of numbers and rankings) into four groups, with each group racing each other once (for a total of 3 races). Assuming all 3 races are completed on the first day, on the second day the Radials are divided into Gold and Silver (top and bottom half) with a further three races scheduled. The last Gold fleet boat therefore should finish one place ahead of the first silver fleet boat. If not, all 3 races are completed on the Saturday then the fleet remains as a round robin and a further 3 races are done in the existing groups. This round robin followed by Gold/Silver is a common format for international events.

Indeed the Qualifiers match international regattas as closely as possible, although being over just 2 days it is a short series. Where possible we race trapezoid courses with inner and outer loops (so the fleets don't meet). Sometimes due to available race area, safety, or cost implications we need to do triangle sausage courses (just as they used to do at the Olympics many, many years ago.)

Normally the Qualifiers are just the Olympic classes: Standard rig (for men) and Radial (for Women) but occasionally we are joined by the 4.7s when the venue and dates allow. The 4.7s have their own excellent circuit which does not need to avoid so many international events and so can race later in the year and at smaller venues due to fleet sizes. The dates of all these events are found on the events calendar and there is a substantial discount for entering early as this allows us to seed the sailors into groups and ensure we have appropriate amount of safety cover etc.

The key thing about the qualifiers is it is the only time we get all the cream of British sailing at the same time. If we consider the female sailors, it is interesting to note that the winners of at least the last 5 Olympic gold medals have used male training partners, as they want to be pushed and it is the same with Youth. Ben won an Olympic medal as a teenager but part of his success as well as his tremendous talent, was the fact that he was pushed incredibly hard by so many people. The Qualifiers is the one place where the cream of British sailing all compete. It is the top sailors in the class who push the standard, which is why if possible we want everyone racing together, so everyone gets better and better, giving British sailors the best possible chance of success internationally.